Where two strings have led us

It all began when my father chanced upon Don Dunford putting his famous Flying Machine through its paces on an early evening 1970s TV show.

Don, a retired RAF engineering officer, had spent fifteen years perfecting the Flying Machine, often referred to as the first two line stunt kite. Made from inexpensive sticks and cotton shirt material the Flying Machine could be controlled with amazing precision. In the TV clip, Don removed his wife’s hat from over 50 metres with the wingtip of this kite.

However, my father wasn’t the only one watching and following the TV report, which was aired just before Christmas, demand for the kite far outstripped his manufacturing capability. Don was making his kites in Oxford, not far from us: we thought we could help and were keen to grow our fledging business in toys and kites. We approached him to help with manufacture and distribution and so began our long term relationship with Don and with kites in general.

This led us to many interesting places and associations - from the use of delta kites in aerial photographic surveys of penguins in the Antarctic to demonstrating 6 red Flying Machines in a replica formation of the Red Arrows at Fleet Airshow. In 1977, a team of our delta kites flew for the Queen’s Silver Jubilee at Greenwich.

A request for a kite to simulate a hovering hawk and capable of flying day and night led to the development of the Twin Keeled Delta and our interest in birdscaring techniques. We are still developing new kites for this market.

Kite enthusiasts will remember these early models as important in the history of kites and may even have owned one. Our production peaked at over 200,000 kites, but toys are subject to the whims of fashion and demand dropped as competition from other toys and cheaper imports increased. Meanwhile, the focus of our business shifted to the education market.  We still sell kites and actually have some of the Dunford Flying Machines amongst our old stock. Importantly, we continue to produce and sell a full range of kite making kits for schools and clubs – hoping to encourage the next generation of Don Dunfords! 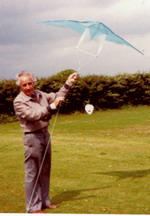